The Seoul Biennale of Architecture and Urbanism (Seoul Biennale) incorporates a wide range of fields – from sociology, geography and economics to literature, art, theater, and film – to engage in research and debate around the future of cities around the world. Themed on “Colletive City” of 2019 aims to create a space for communication and engagement of citizens in the creation and transformation of their cities and develop new collective strategies.

The Legend
Growing from a remote town of 300,000 residents to a megalopolis of 17 million in 40 years, Shenzhen was China’s dream city for the young and ambitious in the 1980s and ’90s. “Time is Money, Efficiency is Life” was a widespread propaganda of China’s economic reform.

The Top-down Planning
As Shenzhen’s city center, “Futian Central District” covers 4.4 square kilometers that not only urbanizes in “Shenzhen Speed” but also epitomizes the “Shenzhen miracle” as a city center built through entirely top-down planning and design. Fully adopting the rational and functionalist principles of the Modernist city, “Futian Central District” becomes spatial manifestation of a hybrid mixture of global capital icons, socialist ideology and traditional Chinese symbolism. Grand central axis with vast green spaces, wide-boulevards for vehicular traffic, isolated city blocks and glittering skyscrapers all together produce an image of a modern, forever young and future looking city, while at the same time left many socially and psychologically deserted urban voids. 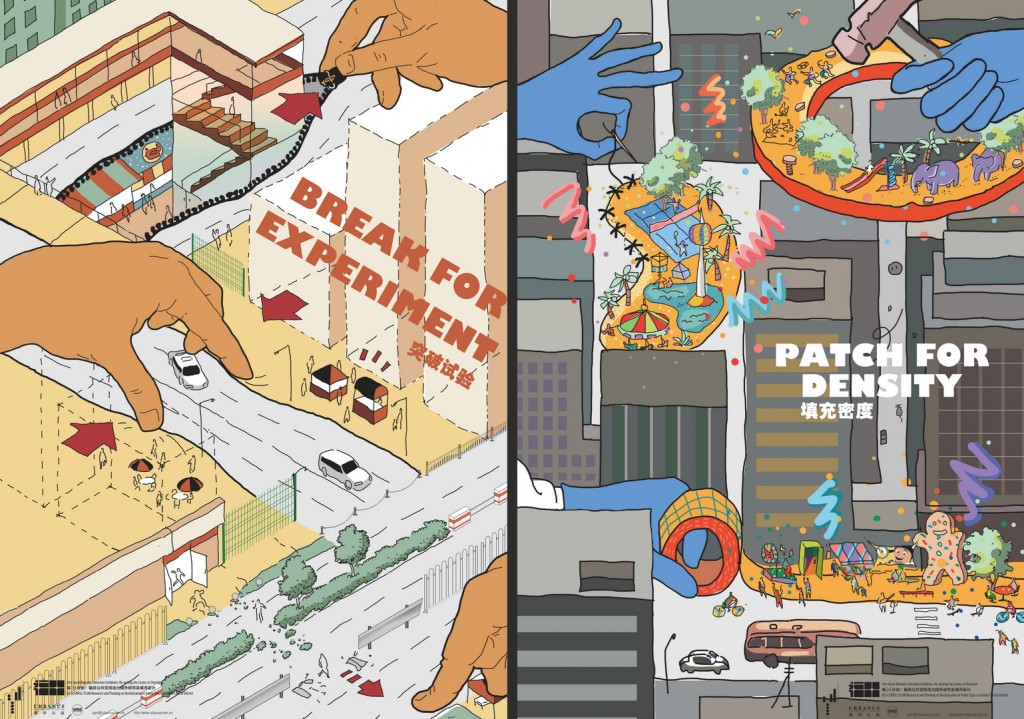 BREAK FOR EXPERIMENT (LEFT)
In the premise of breaking through the existing system, it goes beyond the limits of urban management.
PATCH FOR DENSITY (RIGHT)
Infilling urban voids will increase program density, make urban public space vibrant and increase “social density”. 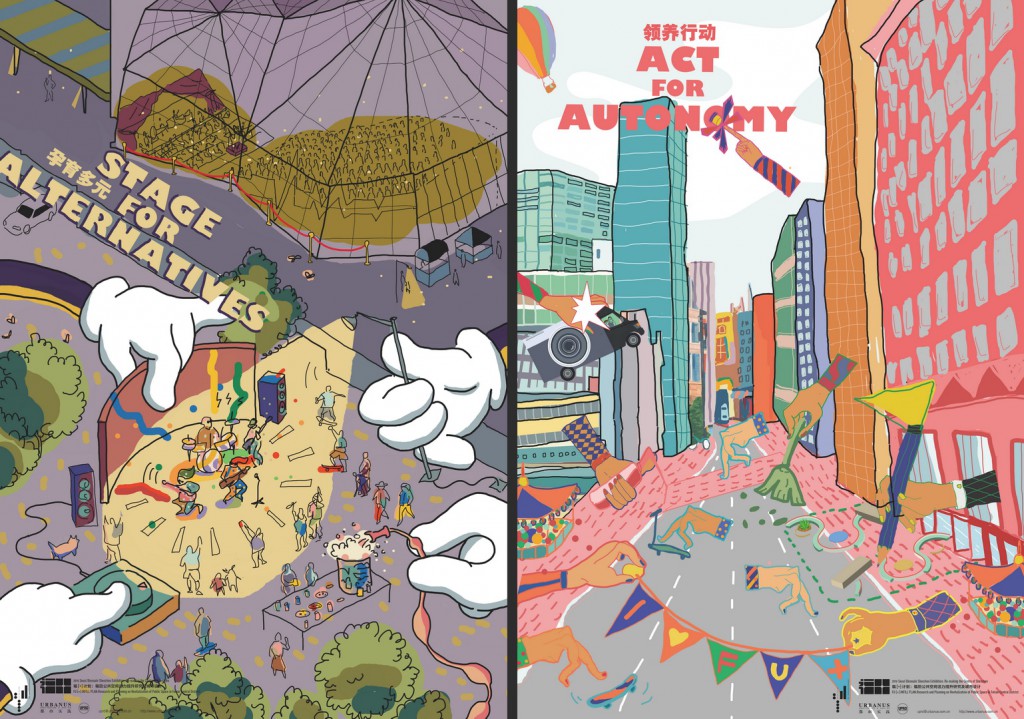 STAGE FOR ALTERNATIVES (LEFT)
Making culture venue into culture destination is to provide platform for emerging cultural institution for a diverse culture center.
ACT FOR AUTONOMY (RIGHT)
The concept of “urban adoption” is to have a “street code” that allows appropriation initiated by citizens to take place.

01 The People’s Axis
The Central Axis is selected as the focal point for Fu[+] Infill Plan as its spatial and political significance making it powerful and influential to be a “proto-district”. The idea of making the central axis “Civic Axis” is unprecedented in Chinese urban design history. By opening up the center for the elevated walkway, it leaves the axis for the people while the municipal buildings of Shenzhen siting on two sides. However, the once visionary intention will never be fully realized without adequate spatial experience and diverse urban programs.

02 From Spaces to Places
Connecting by an elevated walkway at the central axis, the North Axis Culture Center -cluster of four cultural venues of Shenzhen is located on both sides of the elevated walkway connecting the civic center and Lianhuashan (Lotus Mountain) Park. However, the enormous scale, rigidity and formality of the cultural venues has no longer be able to facilitate the emerging diverse cultural demands of the younger generation. Therefore, alternative stages, “Off-Venues”, as platform for emerging and experimental cultural practice becomes essential to facilitate a full spectrum of “Cultural Ecology”, a true culture center.

03 The Ultimate Icon
Being at the cross-section of the Central Axis and Shennan Avenue, the “Crystal Island” is socio-politically too important to come to an appropriate realized project. Unforeseen factors and forces make its future a question mark that is worth to be answered properly.

04 Chinese Road Crossing
The East-West Shennan Avenue that runs through the city of Shenzhen fulfills the rational and functionalist promises and also serves as symbol for a modern Shenzhen. It becomes a typical Chinese urban problem as it cut off the north part of the city from the south part and too wide to cross.

05 Civic Mall
Not many High speed railway stations like Futian Station, being at the heart of the city center connecting to the high speed railway network all over China, but the potential role of the station being gateway to Shenzhen is undermined. Fu[+] project proposed the concept of “Civic Mall” at the underutilized station plaza, in contrast to Shopping Malls all over Shenzhen, depicts an experimental public space and a new urban destination.

06 CBD Oasis
Among the glittering skyscrapers along the South Axis, an underutilized roof garden is planned at the axis connecting the Civic Square to the north and the Convention Center to the south. The isolated city blocks result in psychologically and socially deserted urban voids. The large roof garden will be regenerated into a new social, cultural and natural oasis.

07 Crack it
Under Fuhua Road is a linear shopping mall that attracts thousands of visitors daily. By opening up the green belt on “Fuhua Road” and inserting public programs, the vitality once hidden underground would be brought to the street to wake up the “sleepy street life” of Fuhua Road.

08 “People Mountain People Sea”
There will be an opportunity to re-think the role of the Convention Center as the new convention center in Bao’an Airport New City will soon take over the job. The reformation of the convention center is imagined to be a giant indoor public space resisting the heat wave of the half-year-long summer in Shenzhen.

09 Individual Collectivity
To allow appropriation is allowing the collective wisdom to remake and reclaim public urban voids. Instead of alienating the people from the city, appropriation is an urban management strategy towards “Collectively Independent”.

10 Urban Guerilla
“Shenzhen” is made to test alternatives and learn from failure to drive the innovation of the inner system. Urban Guerilla is an alternative urban tactic that inherits the spirit of Shenzhen by placing small urban nodes to evaluate the social effect before becoming permanent.