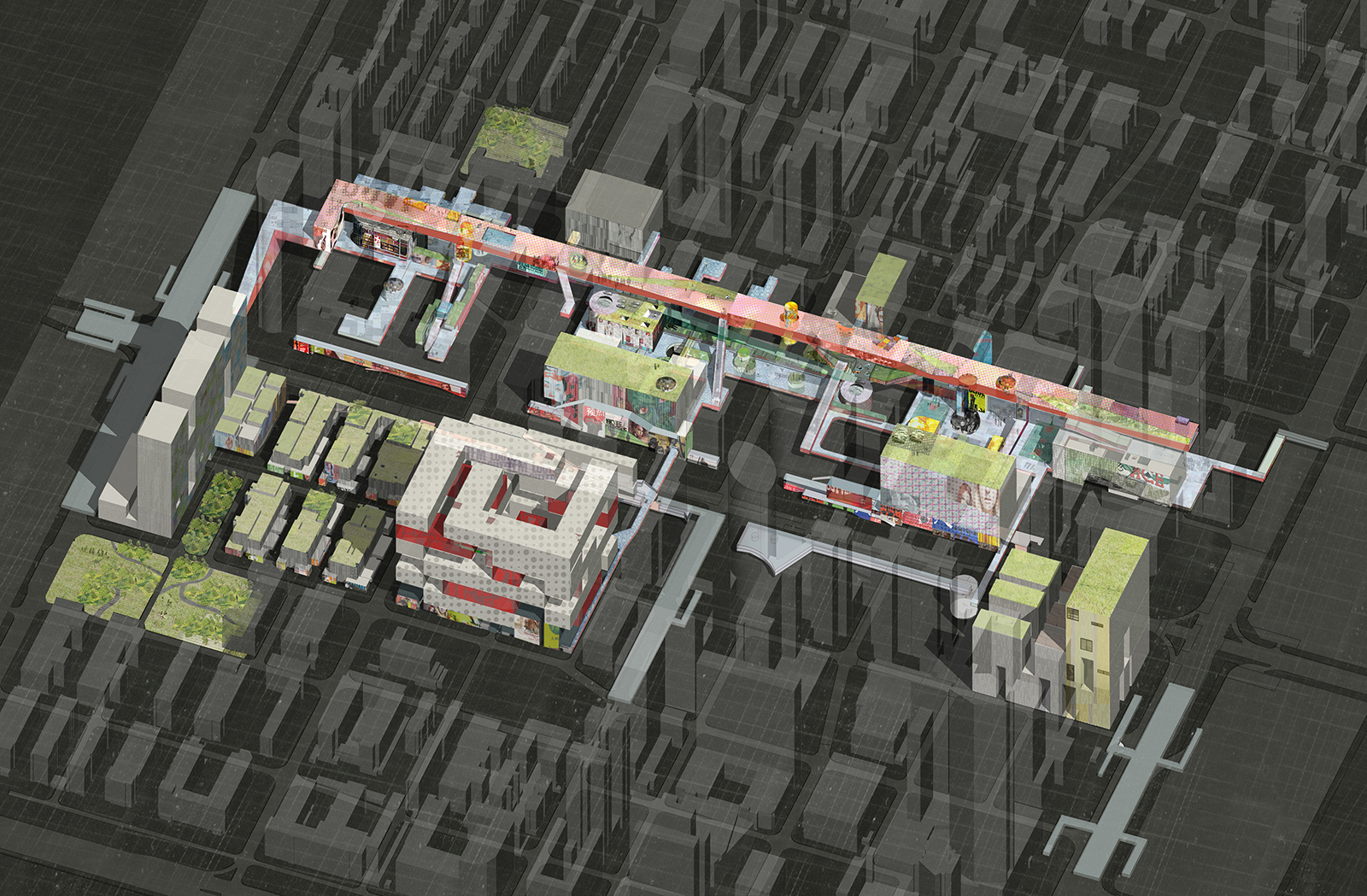 The Huaqiangbei district was only farmland 20 years ago. Then, 10 years ago, it changed into being a famous electronics trading district, after being built as an electronics manufacturing district in 1985. By now, it has become an integrated commercial district, indeed one of the most famous and prosperous business districts in China, with more than 120.000 people working in it, more than 500.000 visitors every day and contributing more than one billion RMB for GDP (Gross Domestic Product) every square kilometre in average.

In this commercial legend, the typical urban fabric, which developed in the period of the manufacturing phase, is the key element for the ongoing boom. Since opening up a new shop only requires a small amount of money and no access demand for the trader whatsoever, this has become an area of growth for various retail traders, as well as logistics and logistic management businesses. The flourishing on the streets of Huaqiangbei is a deeply-rooted phenomenon, strictly related to the diversity and complexity of the backstreet environment.
Due to the attraction for possible huge benefits, more and more large-scale commercial buildings are invading this area, with negative impact on the street space. These huge structures are devouring precious commercial space, undermining the survival of lower-scale commerce, as has already happened elsewhere, all over China. In view of the observed mass development, that will inevitably lead to the loss of that unique and commercially positive low-scale context which characterized the urban landscape of old Huaqiangbei. Right now, the aggressive development is destroying the existing logistic and service system in the backstreets; in turn, the un-regulated logistic system in the backstreets is deteriorating the jam-packed traffic situation in the main street of Huaqiangbei.
On the other hand, Huaqiangbei is facing a great chance for new development. The huge business potential attracts the urban planners. In the next few years, 4 metro drill sites will be opened and 3 metro stations will be built in this commercial block, which is not more than 940 metres long. All of this indicates that, inevitably, the Huaqiangbei commercial district will be involved in a new large scale development. Huaqiangbei is facing the challenge.

With regard to its existing prosperity, we must make our urban design strategy prudently. We realize that it is urgent for designers to find a new way of spatial hybridization. In the context of inevitable mass development, we have to protect small and human scale urban space for low-end market. On the surface, the problem in Huaqiangbei is the inextricable traffic problem, but, based on our observations, the key issue of the programme lies more in the regularization of the service system on the backstreets, organizing a reasonable 3-dimensional connection and strategically responding to the XL. Therefore, we bring forward our strategy of INFRASTREET. As our main goal, we intend to build a public service infrastructure in the block. It will serve Huaqiangbei Road, helping circulation in the blocks, mediating existing and potential problems in terms of high-density development. Mass development phenomena should be properly guided, as urban anchors they will be have the capability of contain the small-scale business. At the same time, the INFRASTREET system, including bridges and integrated underground shopping streets, will connect anchors in both sides of the road. In conclusion, INFASTREET is a spatial strategy encouraging appropriate mass development and is a space manual for its suitable and proper potential development.