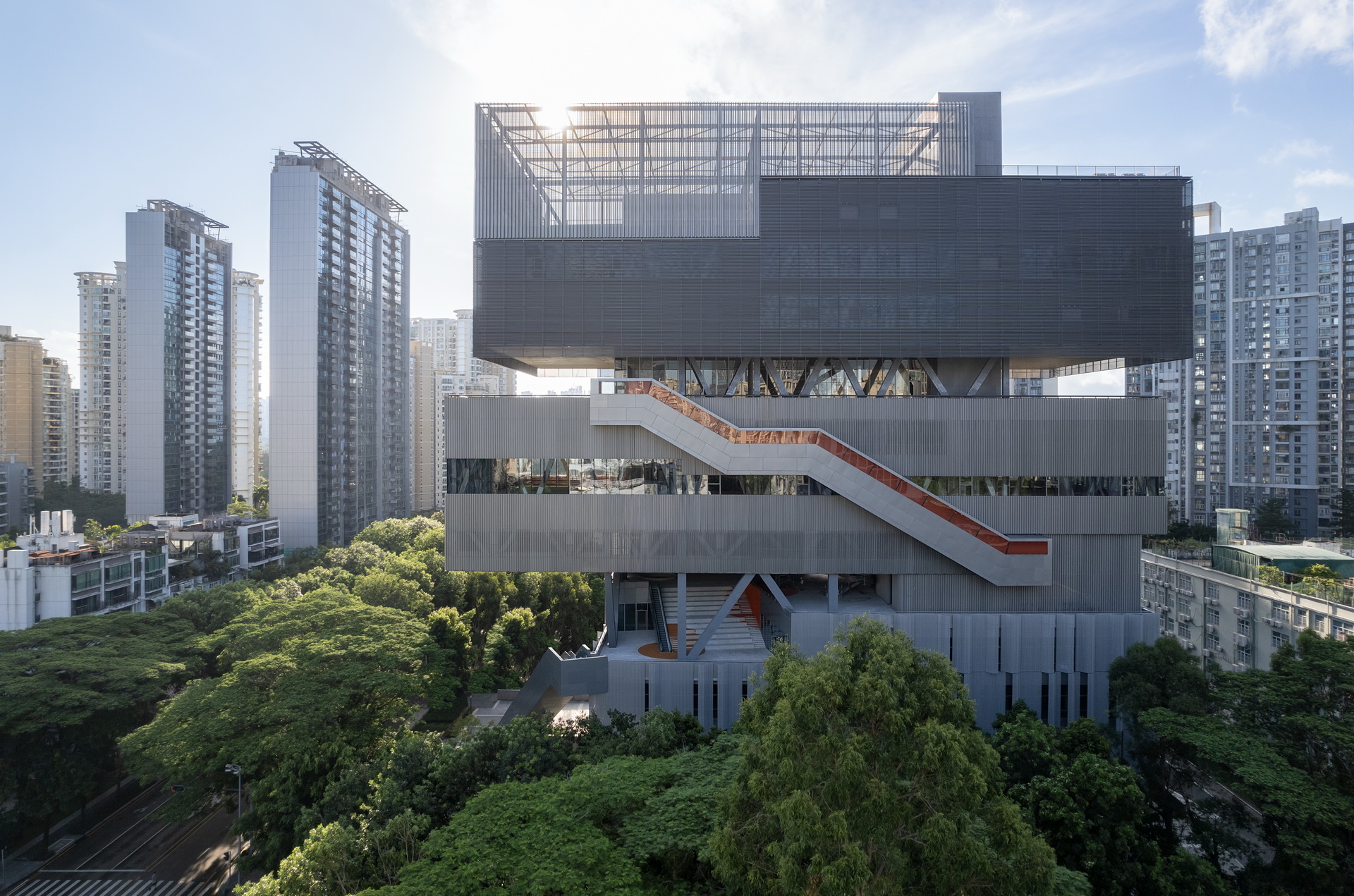 After experiencing the rapid and extensive “urbanization” development, Shenzhen is entering the era of refined “metropolitanization” development. The existing isolated island-style cultural and recreational facilities lack of variance and contact with each other, which does not meet the needs of contemporary Shenzhener for cultural urban life. A network of several embedded and diverse cultural life nodes is becoming a new direction for the city’s cultural construction. As a result, a new type of urban public building that is different from the traditional social roles and building types has been generated.

Traditional Sport and Cultural center tend to keep various functions separate from each other to avoid interference. The result is often that each space is relatively independent and secluded, and the whole building becomes purely functional rather than interactional. Yet the fragmented urban open space, scattered around the structure, as it provides multiple possibilities for interaction between different groups of people, has become a source of true vitality for these sites. On the basis of ensuring the independent operation of all the indoor facilities, URBANUS try to provide as much public open spaces as possible within the new cultural and sports center to promote interaction between different clusters of people. The new Sports and Cultural Center is inevitably going to be three-dimensional due to the limited site area. Therefore, the architects try to break through the concept that “the open public space within a city was only limited to the ground plaza” by lifting the public spaces and superimpose it in the vertical direction within the structure, so that series of interconnected aerial public platforms have been created at different heights within the building, which also incorporate interaction with the city. On this basis, the spatial boundaries are dematerialized between the horizontal layers, new flexible and public functions are inserted, which makes the platform layer become an elevated urban living room that intrigues urban vitality. A new building type of three-dimensional public space has been generated.

To harmonize with the surroundings, under the limited land use condition, the architects chose to chamfer the corner to create more public gathering space for the neighborhood by recessing the first to fourth floors of the building to form a small plaza which receives shadow cast by the structure. The plaza now becomes a public gathering space for different groups of people from the surrounding schools and commercials, and also serves as the entrance to the cultural facilities of the Yuehai Cultural and Sports Center. The architects placed coffee shops, theater entrance and community services at the most accessible area which starts from the ground floor and extended to basement level as well as the 2nd floor. For the purpose of promoting the interaction with the public square, the ground floor has been opened towards the north-west side.

In terms of functional allocation, considerations such as the efficiency of space use, the rationality of structure and environmental impacts have been fully concerned. The library locates in the ground floor, which created the best accessibility and its regular column network as the support of the large-span space truss above ensures the rationality of the structure. The swimming pool is raised to the middle of the volume, and the semi-open platform layer right below the swimming pool serves as an outdoor waiting area. The pool not only has a panoramic view of the city but also becomes part of the city’s landscape. The sport programs are placed at the highest point of the volume to minimize noise disturbance to the surrounding environment, and the sky sports garden below it can serve as a plaza for residents to warm up and exercise outdoors.

Instead of distributed homogeneously, the three urban public spaces located at different levels have different functional attributes and atmosphere. “Community Life Plaza” is the most public space, serves as a main interacting point for people who come to community service, library and sports venues. “Elevated City Living Room” is a buffer zone in between the cultural and sport facilities, the Outdoor Tennis Court and 24 Hour Library are also allocated in this area. The “Sky Sports Garden” offers an outdoor fitness facility with an undisturbed, panoramic view with the most relaxing environment. The three urban platforms are interconnected by public escalators, which together form a three-dimensional 24-hour block park.