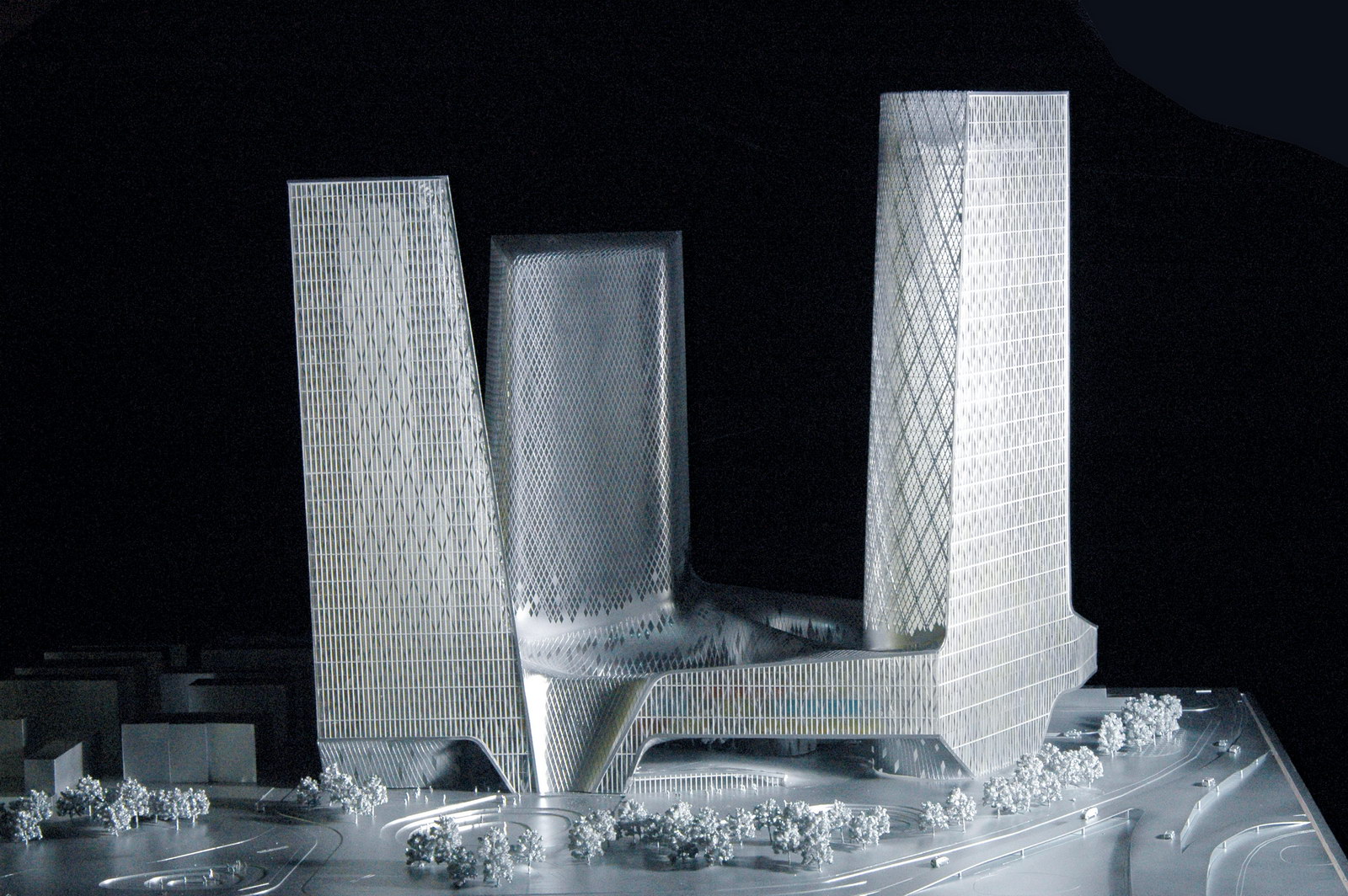 The two design proposals for the Futian Science & Technology Plaza made over a period of three years have shown URBANUS’ deepened understanding of the built forms in contemporary cities.

The first plan aims to, through simple geometric structure, provide solutions for contradictions between the chaotic urbanism of the villages to the north, the high-rise buildings around the periphery, and traffic problems in the area. The building complex consists of one square tower, one round tower, and one slab-type high-rise podium. The square tower is a modern office building furnished with many sky gardens of different sizes. The round tower mainly functions as a hotel, supplemented by office, conferencing, and exhibition facilities. These two geometric structures are highly identifiable within the milieu of varied urban textures, stressing its architectural purity. Their coherence provides potential for dialogue. The long narrow podium features a sloped roof, which increases visibility of existing structures to the north. As well, it offers a background to highlight the two tower buildings and a screen to conceal disorderly constructions in the back. Transparent corridors, open staircases, and apparent massing give one a feeling of traveling inside a metropolis.

The second plan puts forward queries and reflections on the transformation of urban spaces brought about by the typical large building complexes popular in China today. A typical project features tower buildings built on a large podium. On one hand, tower buildings maximize land value and landscape resources, while asserting symbolic significance and civic pride. On the other hand, with large public lobbies, multifunctional and business space, podiums fix high-rise towers tightly to the base, perpetuating the stereotypical “stable solemn building”. However, the tower-podium building type tends to isolate buildings from their surroundings. The podium’s occupation of the base blocks people from moving freely with urban space.

In this large-scale complex consisting of business, hotel, and apartment buildings (as designed in the second plan), the tower building and two podium buildings are not separated like typical complexes. Instead, they form an integrated and consistent whole. The podium is raised into the air, serving as public space linking the three tower buildings. It functions not only as an open platform, but also as a huge container housing all its public facilities. The whole building complex is a virtual landscape, with steep peaks, deep valleys, and stalactite formations. The ground around the plaza is set free again; grasslands, groves, and space for different activities are scattered here and there so that human movement is no longer blocked. Urban figure-ground is transformed from the two-dimensional to the three-dimensional, and landscape potential is maximized. The urban dweller’s dream to live a pastoral life is, thus, materialized through this artificial landscape.