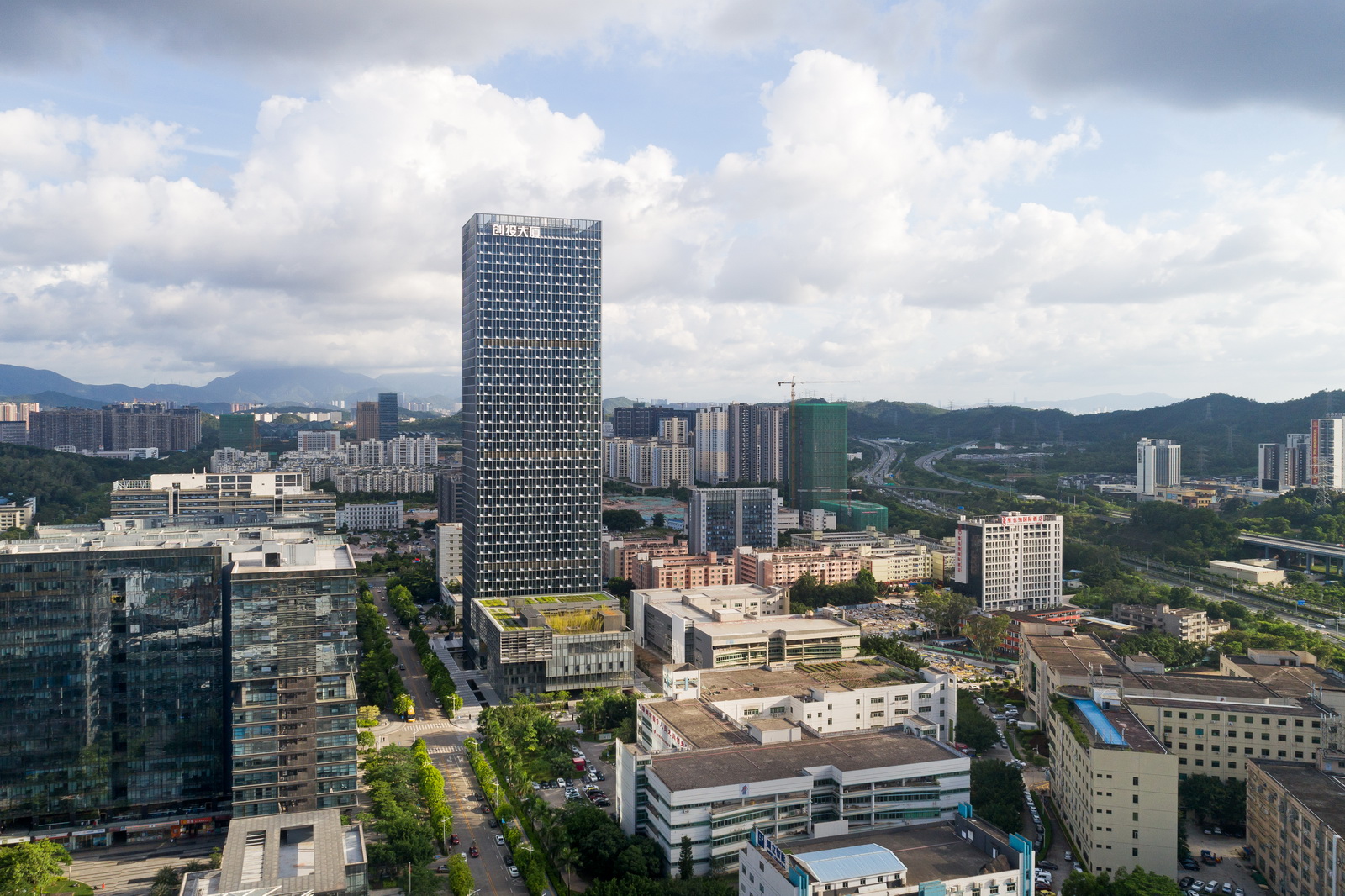 After 30 years of rapid development in Shenzhen, a large number of old industrial sites are facing renewal. The traditional mode of renewal is to first demolish, then reconstruct, and this tendency has spread from the city center to the surrounding areas. This project of the Chuangtou Mansion is located in Longcheng industrial park of Longgang district in Shenzhen, where the transformation from industrial plants and supporting facilities to residential and high-tech office areas is taking place. The scope of the design initially covers the headquarters building as well as its surrounding area. We hope to adopt an open and flexible system of urban design to achieve a symbiosis between the old and the new, to integrate the industrial production with the city by incorporating the existing surrounding environment, and to come up with corresponding strategies according to the uncertainties in the transformation process.

We plan to retain the original multi-storey research and development building group on the west side of the site, and to connect the roofs of those individual buildings with an aerial ring corridor 18 meters above the ground, forming a new urban infrastructure. A series of small towers are inserted into the interstices of the existing buildings as plug-ins, which not only hold vertical circulation and shared facilities, but also serve as the structural support of the ring corridor. Inside the “ring” would be a continuous and flexible space that situates the innovative offices and communication areas, with common facilities such as business centers and conference rooms. There are also open atria, courtyards and light wells throughout the ring, and a roof garden on top being directly accessible. This urban design aims at creating for the research and development enterprises and new small enterprises a three-dimensional industrial park and a dynamic aerial settlement, within which the coexistence of old and new buildings and the mixing of various spatial typologies would satisfy various user groups and the diversified future modes of production.

Unfortunately, only the headquarters has eventually been fully implemented. The main tower of the Chuangtou Mansion contains research and development office spaces, the exhibition hall and the information center. The auxiliary building retains a sector of the “unfinished” urban “ring” (its L-shaped volume being a cropped corner of the original aerial corridor), which accommodates two floors of flexible new office spaces. Below that is situated the entrance plaza, the lobby, the large lecture hall, the multifunction-communicational space, as well as dining and other supporting facilities. The double-height space at the center of the auxiliary building is open to the city, and the two floors on the east side along the street serve as commercial areas. The first floor of the north side is elevated to create a large outdoor exhibition space below, while the large staircase in the middle introduces people into the sunken courtyard and exhibition hall on the lower level. Thus the interior of the building forms a continuous flow of spaces that allows rich and dynamic urban life within.

This nearly-200-meter building is currently the tallest architecture in the area. Even though the more prospective part of urban design has not been implemented, we still hope to make use of this project as an opportunity to integrate the originally loose and fragmented urban fabric and to reshape the regional landmark with rigorous yet restrained architectural language. The design of the exterior wall employs the standard aluminum curtain wall unit, which following a certain rule of variation and combination, creates a unique visual effect through gradually altering the tint of the material and width of the aluminum plate. Moreover, corresponding to the subtropical climate of Shenzhen, the details on the North, South, East and West facades are each designed differently. By increasing the depth of the curtain wall, a three-dimensional shading system is formed to improve the energy-conserving performance of the building. With the overall outline being concise and clear while the facade texture being rich and varied, the building presents itself as an embodiment of the vivid identity and unique spirit of a gathering place for new enterprises.