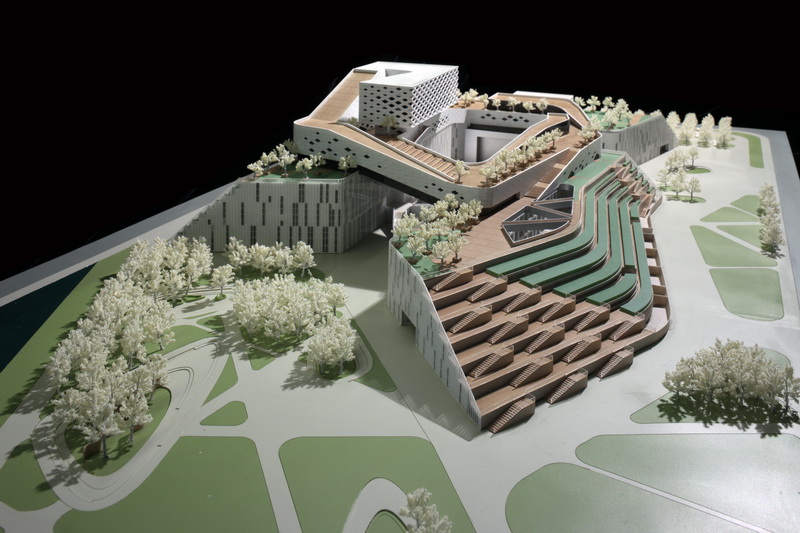 The Caofeidian International Ecological City Cultural Center is a public facility located in the vast expanse of wetlands soon to be a new city. In such a rapidly-growing city, the development of any buildings can hardly find a fixed reference because the built environment is unpredictable. As one of the most important public buildings in the city, the cultural center is clearly a place for collective memory. It cannot frequently be face-lifted according to changes in the surrounding environment, nor to the shifts in fashion trends. The design is to make an introverted settlement with the image of natural forms of landscape, so as to be immune from any surrounding influence.

Three of the four parts of the cultural center are designed into three individual mountain forms, including a library, an activity center, and a theater. Such a design greatly simplifies the complexity of the sophisticated programs. The art gallery is highlighted and placed on top of the three mountains to form a sky walk where one can overlook the entire city’s growth.

As the icon of the city’s collective spirit, the cultural center’s mountain forms are not just a mimic of the landscape, but are also an interpretation of the romantic aura of the time. Surrounded by the three buildings, there is a public square that acts as an event generator for performances, fairs, shows, etc. In different seasons and  times, the flexibility of the plaza provides a variety of activities for the city. The buildings on the perimeters serve the square, as well as function effectively with their well-planned programs. The sky walk above brings a cozy small town experience within the charms of a grand contemporary urban scenery. With this spatial configuration, the building is non-imposing, but holds a distinguished cultural character.