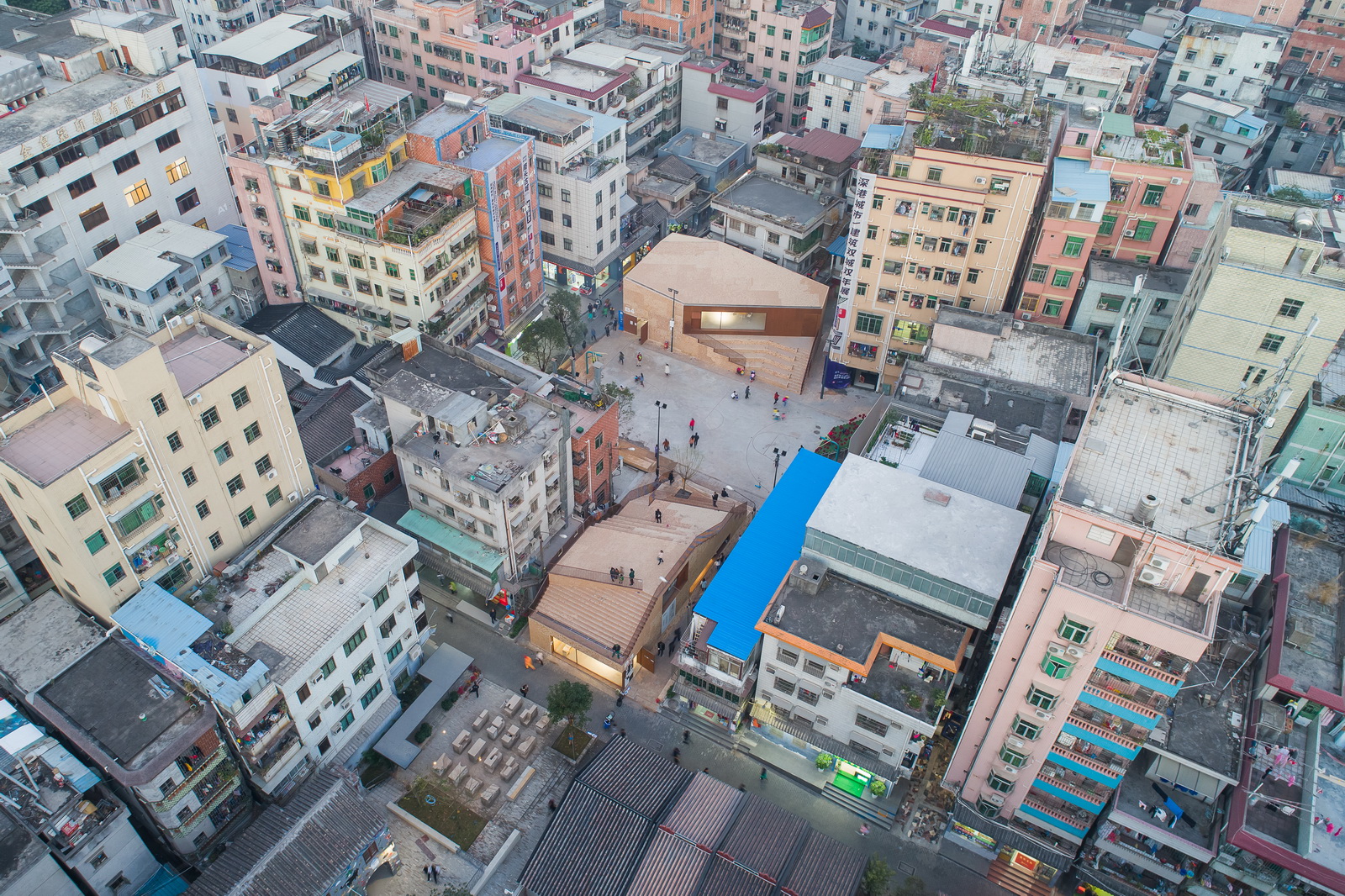 Shenzhen has long been portrayed through an urban myth as a “small fishing village” that grew into a prosperous metropolis in less than 40 years; however, Shenzhen was in reality never just a “small fishing village”. Indeed, located in the central area of the city, Nantou Old Town was founded during the Jin Dynasty and served as the political, military, and economic centre of the Shenzhen-Hong Kong region until the founding of the People’s Republic of China; a history that has spanned more than 1700 years. In the past century, the ancient town has gradually vanished, while the village has continuously expanded. The exacerbation of urbanization in Shenzhen has resulted in a complex pattern of a historical town embedded within an urban village, which is again encircled by the modern city.

At the beginning of 2016, URBANUS started to become involved in the Nantou Preservation and Regeneration Project and concluded that only by respecting and preserving the authenticity of the history can we shape a timelessly dynamic urban community, rooted in local history and culture. We see today’s Nantou not as an old historic town in the traditional sense, but as a historical heritage town that carries on the history and culture of nearly two thousand years, and which preserves the spatial, social and cultural heritage of Shenzhen across every historical period. It is the only precious sample of Shenzhen’s urban culture that displays both millennia of cultural heritage alongside all the optical spectacle of China’s rapid urbanization over the last three decades.

We first proposed a development model of promoting the rejuvenation of the ancient city with the guidance of an intervention, promoting the revival with cultural activities and the gradual activation from a starting point to the broader area. Then as the curator, we timely introduced Nantou as the main venue of  the “2017 Shenzhen-Hong Kong Bi-city Biennale of Urbanism / Architecture” (UABB) . Further field surveys and research into Nantou’s historical documents helped us to find a narrative line on which spatial renovation and the exhibition implementation could highly coincide. We sought to reconstruct a public open space system, something very rare in Nantou. The urban intervention of 2017 UABB is highly consistent with the old town regeneration plan, making a smooth transition from one to the other.

Baode Square: Reconstruction of the center of the old town

“Baode Square” is located at the centre of the old town’s main intersection. The plaza’s basketball court terrazzo floor was once the threshing venue of the Nantou Community in the 1970s. We persuaded the village to agree to have the two temporary tin commercial structures by the plaza transformed into a communal public area for activities. The two buildings’ new roofs will become viewing steps that descend to the sides of the plaza, integrating the architecture with its surroundings, yet still showing subtle differences. Together with the numerous windows, balconies and roofs of the surrounding residential building, the new architecture creates a three-dimensional urban theatre which invites locals to sit and hang out, enjoying the daily occurrence of colorful, lively urban drama.

In the 1980s, a large number of factories in rural Shenzhen were built and rented out, increasing the income of villagers as well as providing more jobs. Nantou factory has a construction area of over 14,000 square meters and was thus selected as the main exhibit space of the Biennale. The horizontal window strips, tinted glass, dry clay, white tiles, as well as colourful mosaics on the facade of the architecture are classic, representative materials from the 1980s and 90s; these original elements are preserved with only one layer of addition in the form of a mural on the wall of the old factory. A temporary metal scaffolding was removed from the plaza on the east side of the factory and the replacement, designed by NADAAA, is a lightweight structure with a translucent ceiling. On the interior, the first floor of the central part of the plant is made open, with also a section of the fence removed to connect the west alleyway, Dajiale  Public Stage, and Zhongshan Park. Lastly, the very bottom of the plant is then designed to connect with the outdoor plaza to create an open market street, which would become a new, creative living area in the long run.

With the rapid industrialization progress of Shenzhen, the “Dajiale Public Stages” were built across the city of Shenzhen in order to fulfill the cultural needs of young people’s spare time in the early stage of Shenzhen’s working culture. Under the existing steel roof truss, three sloped seating areas are placed in the auditorium to not only enhance the facility and atmosphere of the performance, but also to create an informal and dramatic space. Around the roof truss is a liftable fabric curtain system which allows for all kinds of formal or informal, interior or exterior gathering events to take place at the same venue. As a result of the substantial involvement the Biennale had in urban transformation, the use of this multi-purposed “Dajiale Public Stage” shall be extended and integrated into the daily life of local residents after the exhibition.