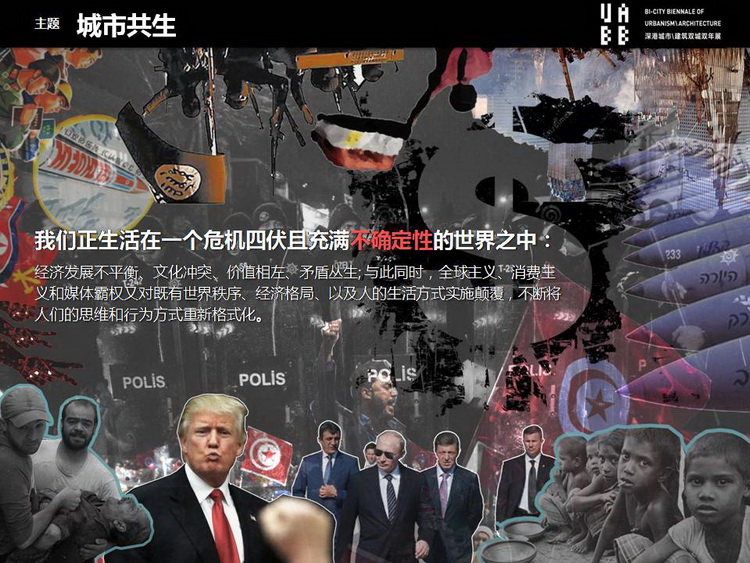 Today, we are living in a world confronting instability and uncertainty, with unbalanced economic development, cultural conflict, divided views, and contradictions. Meanwhile, globalism, consumerism, and media hegemony are overturning the existing world order, economic landscape, and people’s lifestyles, constantly reformatting people’s ways of thinking and doing. Mobilized by power and capital, China’s city making has gone through a rapid development for over 30 years, and the city tends to be homogeneous and generic. In recent years, urban renewal, in a bid to improve quality of life, has further swept away time-honored historical areas and a hybrid urban life, which have been replaced by a globalized and commercialized standard configuration.

Faced with this reality, we call for an urban concept of “coexistence”.

We should consciously resist the promise of an identical and idealistic future, as a city itself is a highly complex eco-system. Today’s city should be a manifestation of a balanced coexistence of different value systems. It should be a civilized community with maximum heterogeneity and diversity in which people co-live in one world sharing a variety of dreams. A city should be all-embracing, and seek harmony yet not uniformity. Its survival and prosperity lie exactly in being more inclusive and tolerant toward the cultural “difference”, “alternativeness” and “otherness”. 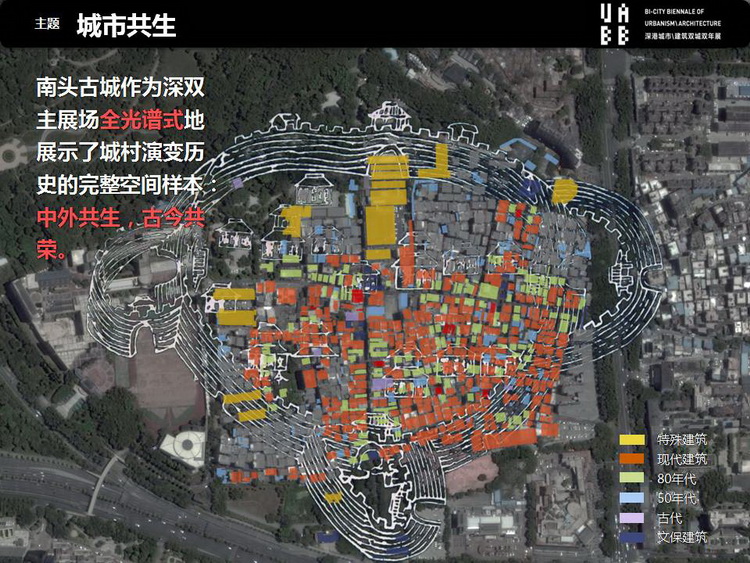 In the past century, the ancient town has gradually vanished, while the village was constantly expanding. The exacerbation of urbanization in Shenzhen has resulted in an intertwined layering of the historical town embedded in the urban village, which is again encircled by the city. As the main exhibition venue, Nantou Old Town displays in a full spectrum a complete set of spatial evidence of the urban village transformation in recent history. It fully embraces its Chinese origin and Western influence, as well as the hybrid coexistence of the past and the present. As a laboratory of urban interventions, UABB 2017 will be organically woven into the regeneration of Nantou historical town to achieve a highly coherent, tailored and seamless result.

“Cities, Grow in Difference” carries the creative energy and passion of the future generation. Now these creative young people wandering on the street can hardly find a sense of belonging, as the free and open spaces in which they live and grow are being squeezed and eliminated by normalized, institutionalized and standardized urban spaces. Places such as CBD, university town, science city, technology park and even the so-called creative park also become identical, conventional and unimaginative. Free minds, vigorous and creative souls should have their inhabitation in the city; however, the current conventional urban typology is no longer able to accommodate any far-reaching vitality of true innovation. Thus, creativity and imagination need to find a new habitat in the city.

Just as the balance of nature, in which the ecological system exists in a dynamic equilibrium, “Cities, Grow in Difference” highlights the balance of the urban ecosystem. On one hand, the balance of contradiction and hybridity in the city shouldn’t be broken arbitrarily. On the other hand, respecting otherness is a challenge to test the inclusiveness of a city. Opposing purity and advocating hybridity is an amendment to the orthodox modern aesthetics and monotonous “progressive” view of history. 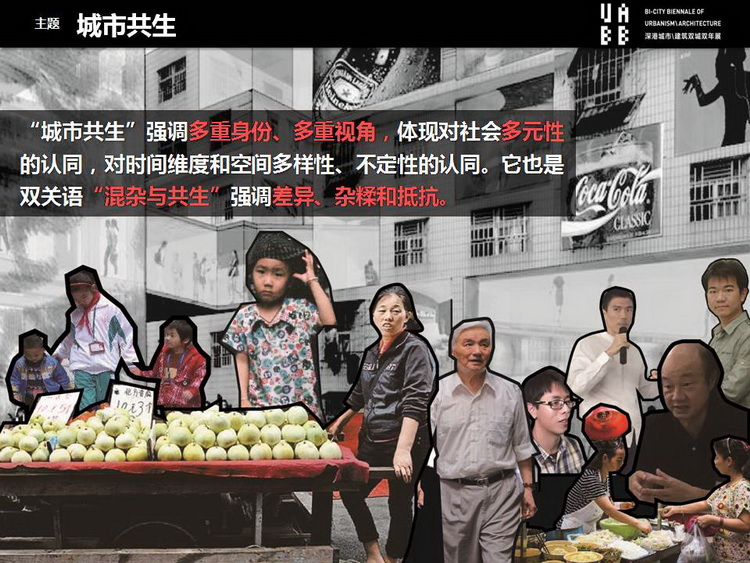 “Cities, Grow in Difference” emphasizes multiple identities and perspectives, and shows the acknowledgement of a diverse society as well as the time dimension, the spatial variety and uncertainty. It is like the pun “The Jungle of Growth”, which emphasizes differences, hybridity and resistance. The exhibitions will be spread all over the lanes and alleys, parks and squares, residences and plants in Nantou Old Town. Sometimes, they are just a subtle urban intervention, which infiltrate into our daily life and encourage unexpected encounters and discoveries. A glimpse during a walk, a moment, or an encounter may bring about profound understanding. It is in this way the exhibition responds to what George Brecht once said, “The most important things are the insignificant ones happening in the street”. 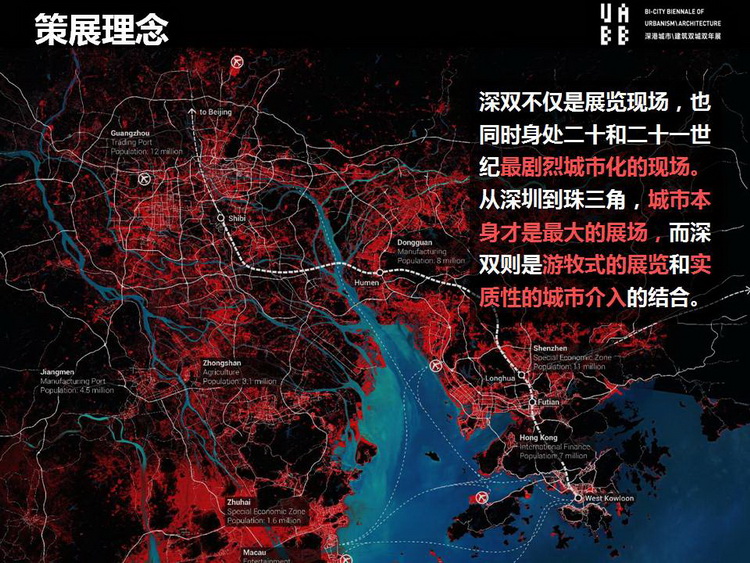 UABB is not only an exhibition, but also the site witnessing the most drastic urbanization during the twentieth and the twenty-first century. From Shenzhen to the Pearl River Delta, cities in themselves are the biggest exhibition venues. UABB is both a nomadic exhibition and a substantial urban intervention. UABB 2017 is grounded in the urban villages, based on Shenzhen and the Pearl River Delta, adopting the developing “southern” world as the object for observation and discourse. It aims to respond to the pressing urban issues and identify new possibilities, knowledge, and the future creative energy embedded in our everyday reality.

We believe that the spatial value of the urban village lies in its inclusiveness and diversity. Compared with today’s massive production of urban spectacle, a result of rapid urbanization and globalization, the physical and spatial forms of urban villages appear remarkably vivid, fully showcasing the genius of human beings when creating their homes. 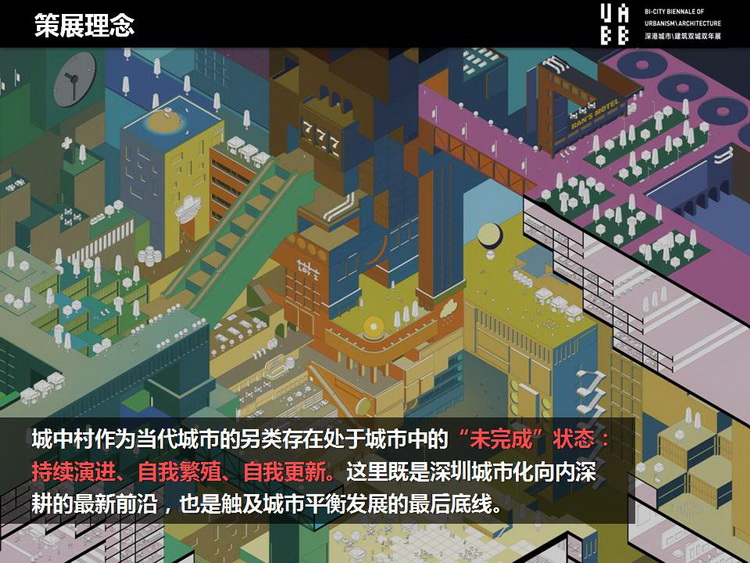 As an unconventional existence in contemporary cities, urban villages are both separated from and connected with the surrounding urban areas, with urban density and vitality beyond one’s imagination. Urban villages are still at a state of “incompleteness” where they keep evolving, self-proliferating and self-regenerating. The self-motivated urbanization of these villages relies on both external and internal efforts, and it is flexible yet uncontrollable. Other urban areas are incapable of duplicating and adapting the spatial production strategies of an urban village. This is the latest frontier to advance Shenzhen’s inward re-urbanization, and also the bottom line and last opportunity to tackle a more balanced development of the city.

Urban villages stay in a “grey zone,” between the condition of clear and chaotic, legal and illegal as well as beyond the “all-or-none” value judgment system. Therefore they should be preserved and given room to act as highly potential laboratories and breeding grounds for alternative urban lifestyles and a true “arrival city” for newcomers. The never-ending and “incomplete” condition of the urban village enables the possibility of incremental modification.

Themed on “Cities, Grow in Difference”, UABB 2017 is a platform for finding new theories, new experiments and new practices. It is also a communication platform focusing on “discovering” instead of showcasing what has been accomplished. It is a constantly growing exhibition. “Cities, Grow in Difference” can be presented by a series of different and independent exhibitions, which are held all over the city and involve the participation of all. The presentation of the whole biennale itself is also a juxtaposition of numerous overlapped biennales. The exhibition structure will be as complex as the city itself. With an overall guiding concept and the ability to adapt, it should be able to fully cope with all the uncertainties in the urban villages where it is held. Moreover, it is also a coexistence of a spontaneous bottom-up “self-organization” and top-down integrated curatorial framework, which provides an alternative model as a critique of the biennale’s own mechanism. It again shows recognition of the juxtaposing difference.

After the exhibition, we’ll leave a consolidated urban archive for the urban villages in Shenzhen. The exhibition seeks diverse, alternative and innovative ways of presentation and interaction. The purpose of the exhibition is not only to exhibit, but also to construct a cultural and social manifestation, interpretation, or declaration. An exhibition is a social platform that builds, if not rebuilds, the connection between works and their social context, providing unlimited possibilities and revealing the reality overpowered by illusions and spectacles. The exhibition can be an alternative resistant space allowing both prominent and marginalized spaces and social groups to coexist and express themselves. An exhibition is final neither a final solution nor an accomplished production, but a starting point, a turning point, an experiment and an expedition.